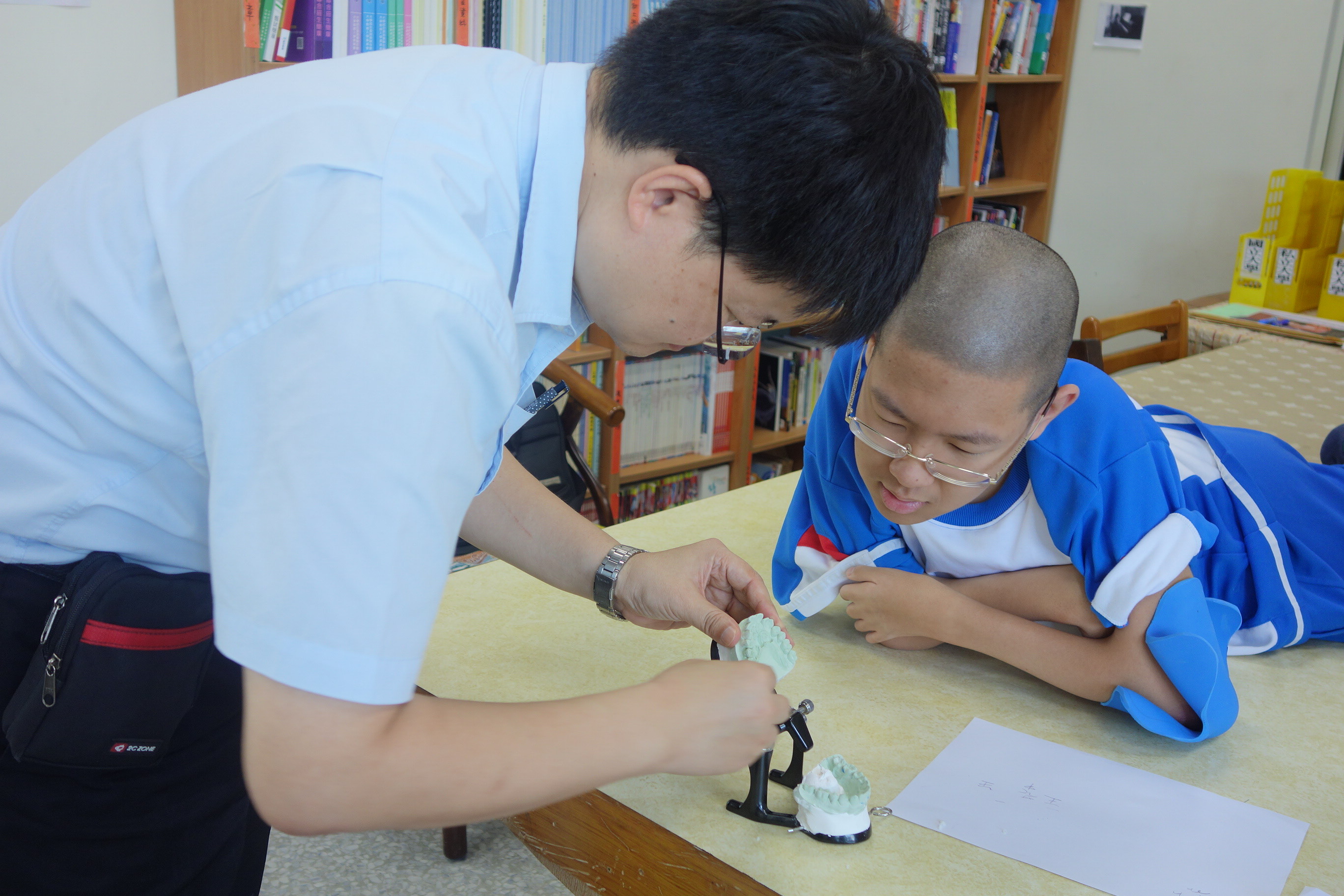 “I hope that I can have a mouth pen to write with” said Xuan-han Wang, a junior high school student at National Hualien Senior High School who suffered from a rare disease called Achondroplasia. This disease affects Wang’s hands and legs, and the only way he can write is to lie on a table and hold a mouth pen. Nevertheless, this special pen made from Japan is going to stop production soon. Without this mouth pen, writing for Wang, seems to become even harder. Jia-chang Wang, Associate Professor of the Department of Mechanical Engineering of Taipei Tech, lead a 3D print team to make a new mouth pen for Wang. From booking train tickets to carry heavy professional equipment, Wang’s team went to Hualien 3 times conducting a customized mouth pen and assistive device for Xuan-han.

In May 2016, there was an inspiring news report went like this: A student with Achondroplasia at Sin-Chen Junior High School was about to graduate. Even if the illness caused muscular dystrophy to his arms and legs so he had to hold a pen imported from Japan, he still dedicated himself to study and has kept great grades for 3 years. The bad news was that the type of pen which Wang has been using is no longer in production anymore; therefore he called out for help. Leehter Yao, President of Taipei Tech, read this report and was touched by Wang’s resilience and hard-working. As the leader of Taipei Tech, Yao wants to fulfill University’s social responsibility by lending a hand to Xuan-han. Yao asked Jia-chang Wang, Associate Professor from the Department of Mechanical Engineering at Taipei Tech specialized in 3D printing, to form a team to reach out to Xuan-han. Professor Wang was on a medical conference when he took this mission. Therefore, he could gather dentist and physiatrist at Mackay Memorial Hospital who were interested in this volunteer trip at a very short time. 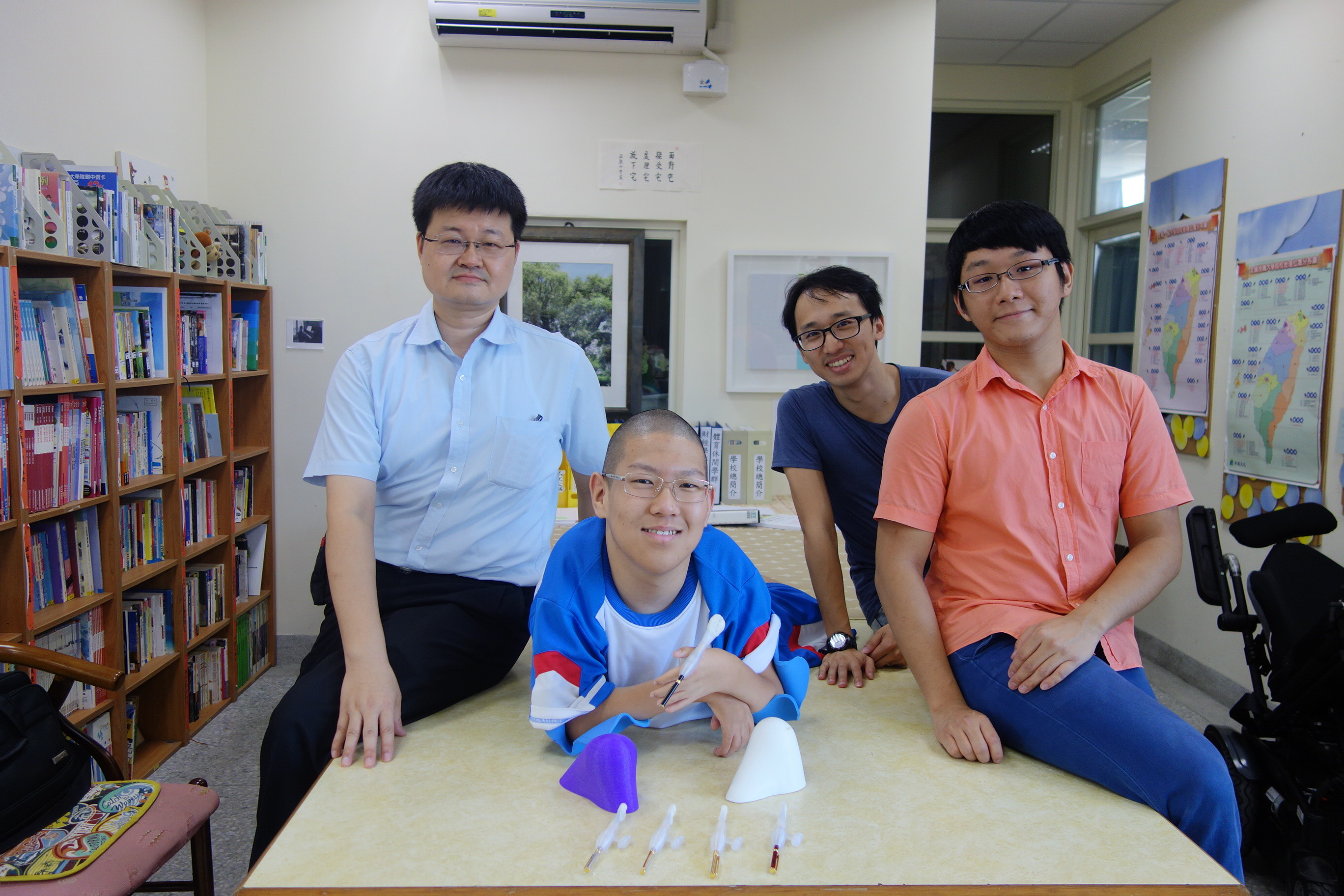 In the first trip, Professor Wang brought a self-designed pen with him but only to found out that Xuan-han had loose gums, Malocclusion, and Scoliosis due to continuously usage of a mouth pen. As a result, Professor Wang’s team has to not only print out a pen but also a mouth guard and elbow assistance device. In order to assure Xuan-han can write comfortable, the mouth guard was made of medical material and the assistance device will protect him from hurting elbows. Moreover, the refill is available at ordinary bookstores. Xuan-han noted that he has been using mouth pen since 8 years old, sour gum and scratch on lips are common for him. Sometimes, the condition was too severe and affected his appetite. But he didn’t know the reason was Malocclusion at that time. After using Taipei Tech’s mouth pen, Xuan-han found that sour doesn’t come to him despite the fact he wrote more than ever. Also, writing became fluent task for him and his words turned out to be neater. Xuan-han’s dream is to become a judge and defense justice for people.

Professor Wang noted that it is a pleasure to help others with his expertise, and he was rejoiced when he received the letter from Xuan-han and saw his pretty words on it.