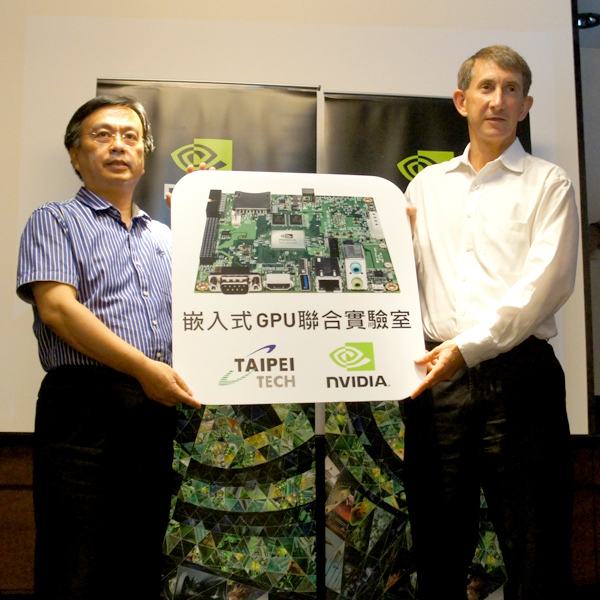 On July 8, NVIDIA hosted the annual GPU Technology Workshop in Taiwan and attracted over 600 government officials and industry and academic leaders. During the workshop, NVIDIA announced that the company will collaborate with Taipei Tech to establish the Embedded GPU (graphics processing unit) Joint Lab (NVIDIA-Taipei Tech Joint Lab), and donated a Jetson TK1 development kit to Taipei Tech. In addition to preparing students to become experts in GPU technology, this project is also committed to develop embedded GPU technology in other fields and provide solutions for business partners using this technology, such as applying parallel computing technology to automobiles, robotics, and other large mobile devices. Taipei Tech alumni are successful leaders in Taiwan's IT industry. NVIDIA and Taipei Tech plan to leverage expertise and resources to play a significant role in the robotic supply chain.

The GPU Technology Workshop held in Taipei this year included discussions on three major future trends: Virtual Desktop Infrastructure, High Performance Computing, and professional visualization & design. This event began with an opening speech from the Vice President of Solution Architecture and Engineering at NVIDIA, Marc Hamilton. The opening speech was followed by the exciting keynote speech from Taipei Tech Honorary International Chair Professor Bormin Huang on the latest computing development of GPU and the latest advancement in space science applications. Professor Huang is a research scientist and CUDA fellow of the Space Science and Engineering Center at the University of Wisconsin-Madison and was a principal investigator of a NASA-funded project. In this joint project, Professor Huang will serve as the director of the NVIDIA-Taipei Tech Embedded GPU Joint Lab.

Professor Huang said, demands in massive data computing pushed the growth of GPU. Its computing speed is much higher than the commonly seen CPU (central processing unit). Using larger memory bandwidth and faster data transfer rate, a few GPU would be equivalent to many supercomputers in the past. GPU is expected to be used in earthquake and tsunami simulation analyses; in automobile systems, in addition to automatic parking, GPU can also recognize pedestrians and animals.

Taipei Tech President Leehter Yao said, "We are very honored to be the first university in Taiwan to collaborate with NVIDIA on this project. Taipei Tech has a long history in cultivating outstanding professionals in engineering research and development, and contributed greatly to Taiwan's electrical engineering and computer science industry. With the expertise of Taipei Tech Honorary International Chair Professor Bormin Huang and the most innovative hardware provided by NVIDIA, this project will certainly lead the way to the next wave of development in Taiwan's tech industry."