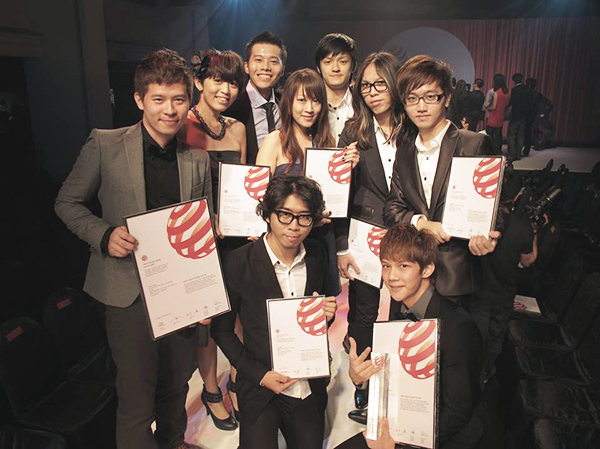 The average age in Taiwan is rapidly rising. The good news is that Taipei Tech students are making contributions in creating better lives for the elderly. Two groups of students from Taipei Tech won the Red Dot Design Award this year. One is the "Unbent" trolley, which also won the Red Dot "Best of the Best" prize, and the other is the "Easy Button."

By combining the jack mechanism with the traditional grocery trolley, "Unbent" makes it easier to retrieve groceries at the bottom of the trolley. In Taiwan, trolleys are commonly seen in supermarkets. The designers noticed that elderly people were having a hard time retrieving their purchases from the bottom of grocery trolleys, so they came up with a solution. Users can simply pump a pedal to elevate the base of the trolley, and press a button to lower it back down; therefore, "Unbent" doesn't require people to bend over in order to place or retrieve grocery items. This leads to less frequent bending and spine injuries, making shopping in supermarkets less energy-consuming.

"Unbent" is designed by Wu Yun-Chi and Lin Chi-Hung, and supervised by their design coach Ms. Zhu Li-Qiao. Both of these students are sophomores at Taipei Tech's Department of Industrial Design. Wu said that she only wanted to gain experience through entering this international design competition. To her surprise, she became Taiwan's youngest ever to win Red Dot's Best of the Best Prize for her "Unbent" design.

The design team for the "Easy Button" consists of Taipei Tech students Tang Wei-Xiang, Tsai Bo-An, and Han Zhi-Shu, supervised by Huang Zi-Kun from the Graduate Institute of Innovation and Design. Before they designed the button, the design team researched on the difficulties of the current buttons. Normally it takes 48 seconds to do six buttons, but because of insensible fingertips or poor eyesight, such a simple act may cause pain to an elderly person's neck and back. With well thought inventions, such as the "Unbent" and "Easy Button", the future lives of seniors will be much more convenient.